The Janet Frame House is delighted to announce our Readers and Writers weekend for 7-8 March 2020. The weekend includes our public picnic, author’s talk and open mic session for local writers on Saturday afternoon and a writing workshop on Sunday.

Our literary guests this year are Shayne Carter and Kate Camp.

Bring a picnic and get comfortable on the lawn of Janet Frame’s childhood home.

Discover Shayne Carter, the man, the author and the inspiration.

Are you a writer? Do you know a writer? Here’s your chance to showcase your talent live on our open mic!

10am – 4pm – Writing workshop with Shayne Carter and Kate Camp.

The morning session will be held at The Business Hive, 26 Ribble Street.

Lunch will be provided. 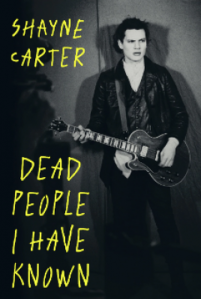 Shayne Carter is best known as the singer /guitarist/ songwriter in bands; Dimmer, Straitjacket Fits, the Doublehappys and Bored Games.

He was involved in the “Dunedin Sound”, the acclaimed musical movement that first emanated from the Southern city in the 1980s.

Shayne is a member of the NZ Music Hall Of Fame and a winner of New Zealand music awards for best male vocalist, best group and best album. He is a three times APRA Silver Scrolls finalist.

He released his first book “Dead People I Have Known” through Victoria University Press last year.

The memoir charts his path from the working class Dunedin suburb of Brockville to his brushes with international fame with the rock bands Straitjacket Fits and Dimmer and his eventual return home.

Receiving a BFM Lifetime Achievement award from Prime Minister Helen Clark provides a queasy and comical opening to his book.
Described as “darkly brilliant” by the Listener and “compelling. smart and immersive” by the NZ Herald. “Dead People I Have Known” is a vivid social document as well as a rumination on family, friendship and what it’s like to be the singer in the band. “Dead People I Have Known” was voted as a book of the year by the Listener, Newsroom and the Spinoff.

Shayne has explored other fields in the last few years, performing live music in the critically acclaimed play “An Illiad”, with actor Michael Hurst, and providing live soundtracks for the contemporary Maori dance company Atamira on several Asian tours.

He spent three months in Bangkok last year as the inaugural Artist In Residence at Bangkok 1899, a new creative/civic hub where he collaborated with local artists.

Kate Camp is an award-winning poet and the voice of Kate’s Klassics, discussions of classic literature with RNZ’s Kim Hill.

Her awards include the New Zealand Book Award for poetry, the Berlin Writers Residency and Katherine Mansfield Menton Fellowship.

Additionally, Kate is a trustee for the Janet Frame House.